It’s trite to love this UNESCO heritage town so much but I guess cliches come from some kernel of truth or at least a repeated sentiment by a collection of observers. For me, it’s definitely my favourite town in the Indo-China strip. It doesn’t have the breathtaking silhouette of Siem Reap’s Angkor Wat or the history of Hanoi perhaps but I think why travellers rave about Luang so much is also because of its energy. More than any other place I’d visited, I felt as though I’d been shuttled back in time and place and what a refreshing feeling! We were told we were staying at a strip of road with various other riverside hotels and was therefore super amused to note that only one car would pass every 15 minutes on a Monday morning. My husband, a big fan of the remote and sleepy, decided this was where he would retire.

The two unfortunate incidents that occurred in this trip however was our flight was delayed to get there, and I fell ill on the second day I was there, so in effect a three day trip got truncated further into a two day trip. I didn’t get to see as much as I wished, but the few things we did left a lasting impression.

Luang Prabang is located at the northern tip of Laos and used to be the capital of the kingdom (it’s now Vientiane). It lies in a valley and is perched over the Mekong River. Laos, Cambodia and Vietnam are all ex-French colonies and the architectural legacy is evident. As I understand it, the term Indochina was meant to reflect the proximity and confluence of two neighbouring civilisations, India and China. While we found Vietnam to have a predominantly Chinese sensibility and Cambodia very much the Indian touch (in terms of its art, perspectives, ambiance, visuals) I must say I couldn’t quite trace either of these two civilisations on Laos, at least not in Luang Prabang anyway. She seemed so much of her own creature. What the three do have in common apart from French colonisation is a political and military history of socialism. Again I felt this the strongest in Hanoi and the least in Luang Prabang.

When we arrived it was close to dusk of a Friday night. Our hotel was located right by the Mekong River (why we chose it) and we assumed it would be buzzing with activity by locals and tourists looking forward for the weekend at a scenic location. It was not. It was beautifully serene and almost unnervingly silent. When we walked around the area at night I even wondered if people were alive and thought it was somewhat creepy. By the time we had to leave the country though, I felt so much reluctance to depart from such healing quietness. It’s a place where we saw children play with each other on the streets barefoot, where residential homes on streets have their doors wide open, and where children would give their mothers presents on their own birthday as a way to express their gratitude for being born. I was actually amazed to still witness this level of authenticity here as I knew that the town had been in the travel junkies hit list for at least a decade by then, and had assumed it had become more artificial. Here are some of our photos that attempted to capture some aspects of daily life there. 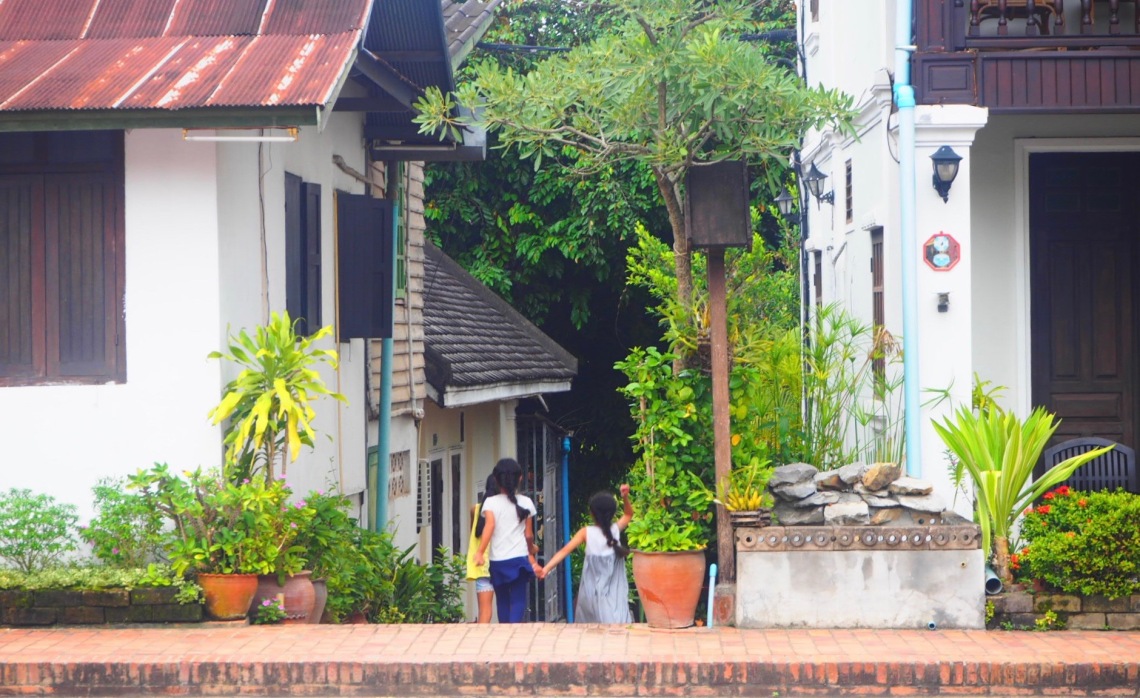 Disarming kids, lost in their bubble of togetherness. 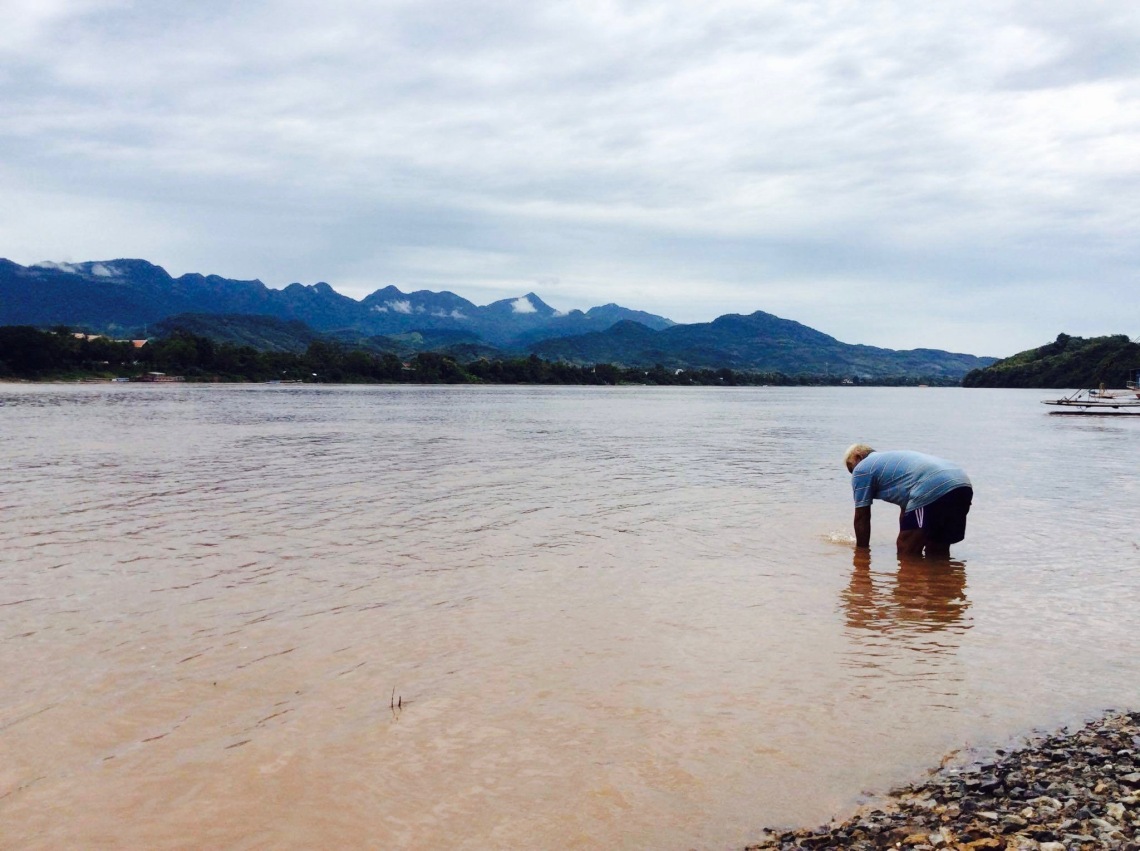 Fishermen going about they daily chores over the weekend. 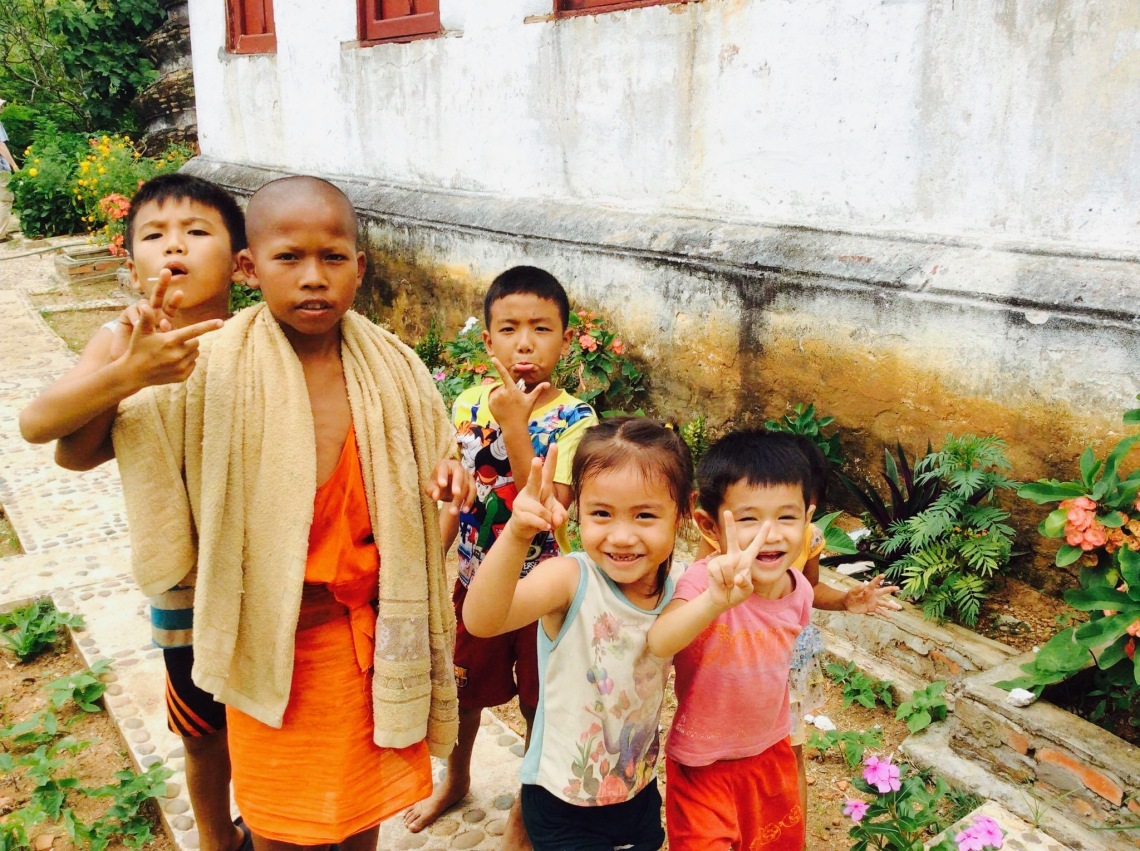 Friends my husband made when he went for a walk across the river.

Everyone associates Luang Prabang with the morning alms walk and we were no different. Hundreds of monks from different monasteries collect daily alms from believers, who perform this act of giving alms to collect merit for their future lives. I have a lot of unresolved guilt about this ceremony in the sense that I think it’s so reductive to participate in a spiritual custom you have no real understanding and concept of just so you can tick your Travel To Do list. I feel also confused by the assertive rice sellers that swarm around the main streets who are essentially commodifying a religious ritual. I felt like the least exploitative way to ‘experience’ this was by just parking yourself at a healthy distance from the ritual and take discreet photos (if you must). I remembered our hotel manager (the unforgettably named Damian Killer) assured us that this was not offensive. We had heard of horror stories of tourists totally destroying the moment by coming too close to the monks and getting into scuffles with others as they shoved their cameras close to the face of the monks for a perfect shot and this is when I loathe the Instagram generation (of which I am also guilty of).

Here are some of our photos on that morning – given my distance and reluctance to put up my flash in the very early hours, they are not of the best quality but I’ve tried to zoom in as deep as possible from my camera and hopefully you can have a sense of the morning. 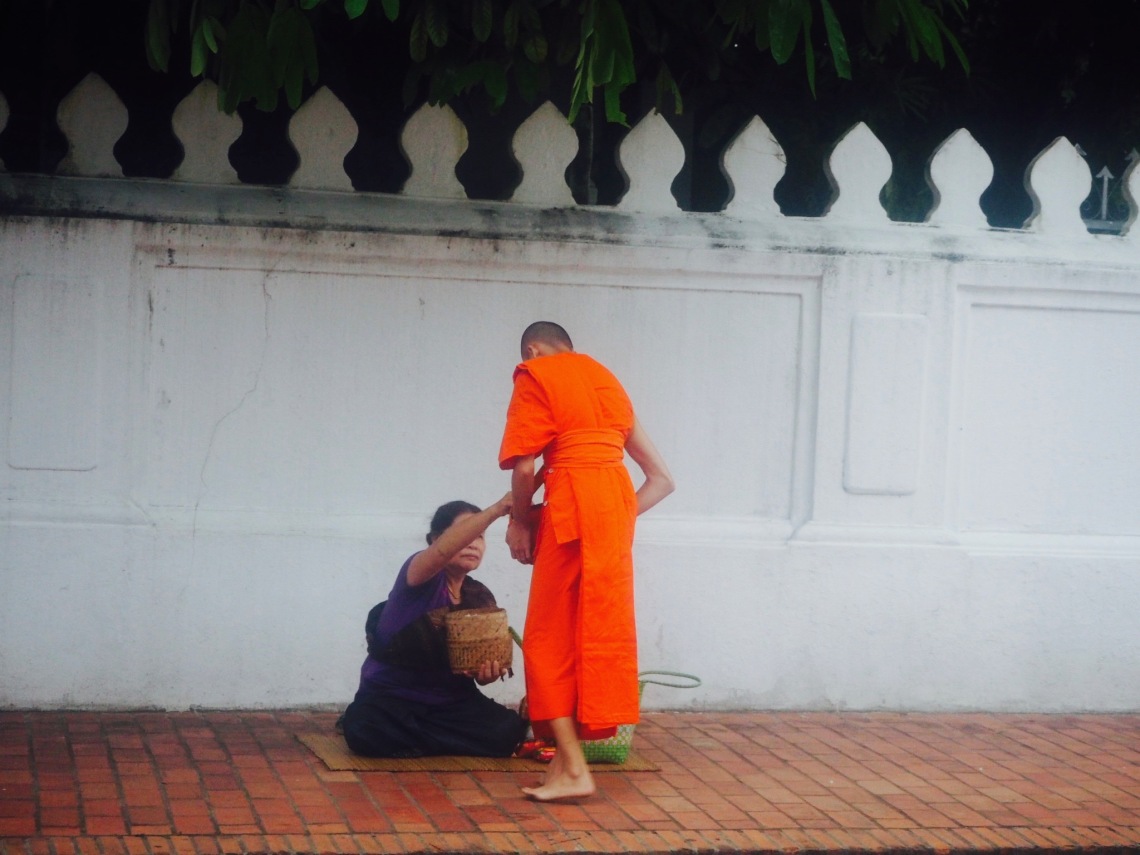 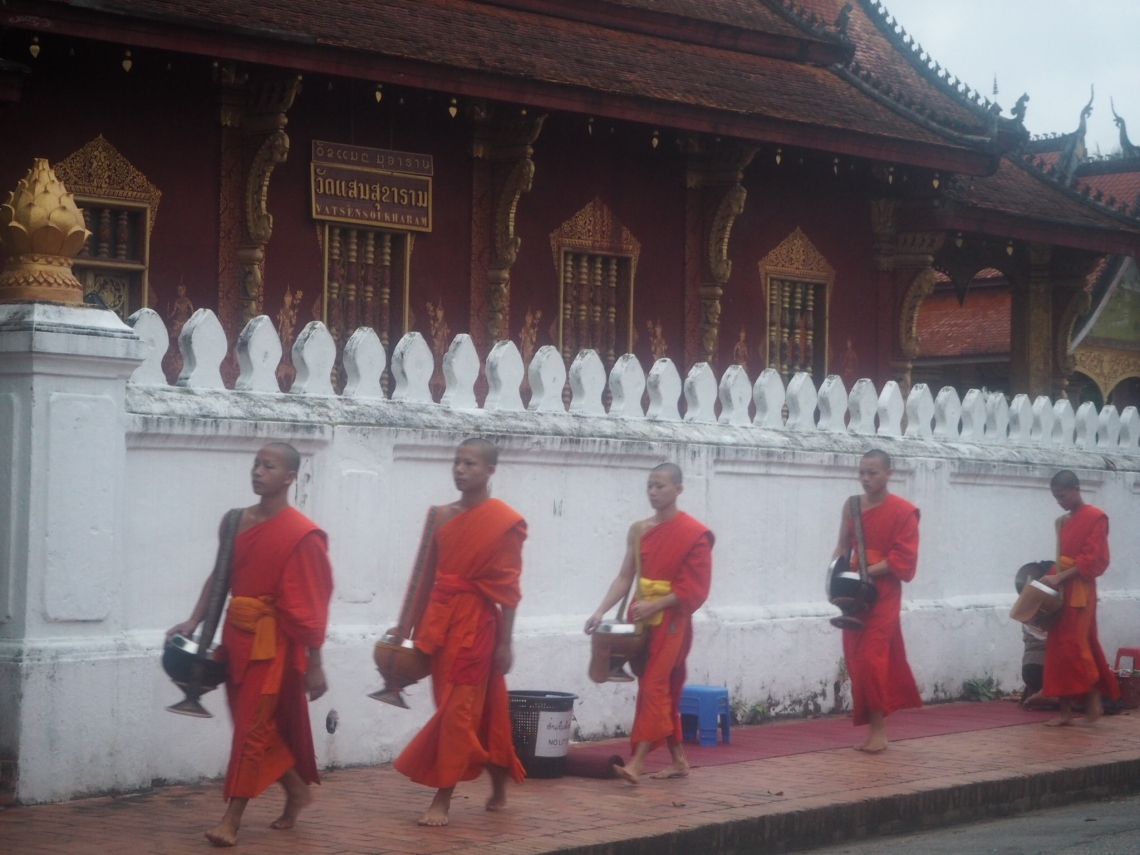 Even though I still felt that our presence and the presence of hordes of tourists quietly snapping photos from a distance really robbed this experience off its true meaning, there is still something extremely compelling about watching spiritually in action.

Walk around the Old Town

We stayed at the Belle Rive hotel (which will be reviewed below) which sits across from the Mekong River and is a 3 minute walk to Sakkaline Road, a road that you can basically stroll around on for hours and hours to just take in the intriguing collection of different temples, mingling side by side with French colonial architecture hosting different type of artisan shops, cafes and spas. I’ve shared some photos of Sakkaline Rd here, and below are further sights.

The 3 Nagas, a super-chic boutique hotel by Sofitel.

Just a random moped parked underneath a tree of vibrant green-yellow leaves. I don’t know if the owner strategically parked it there to visually seduce tourists or colourful mopeds are inherently photogenic but I certainly succumbed to it’s magic as I stared and snapped for ages. 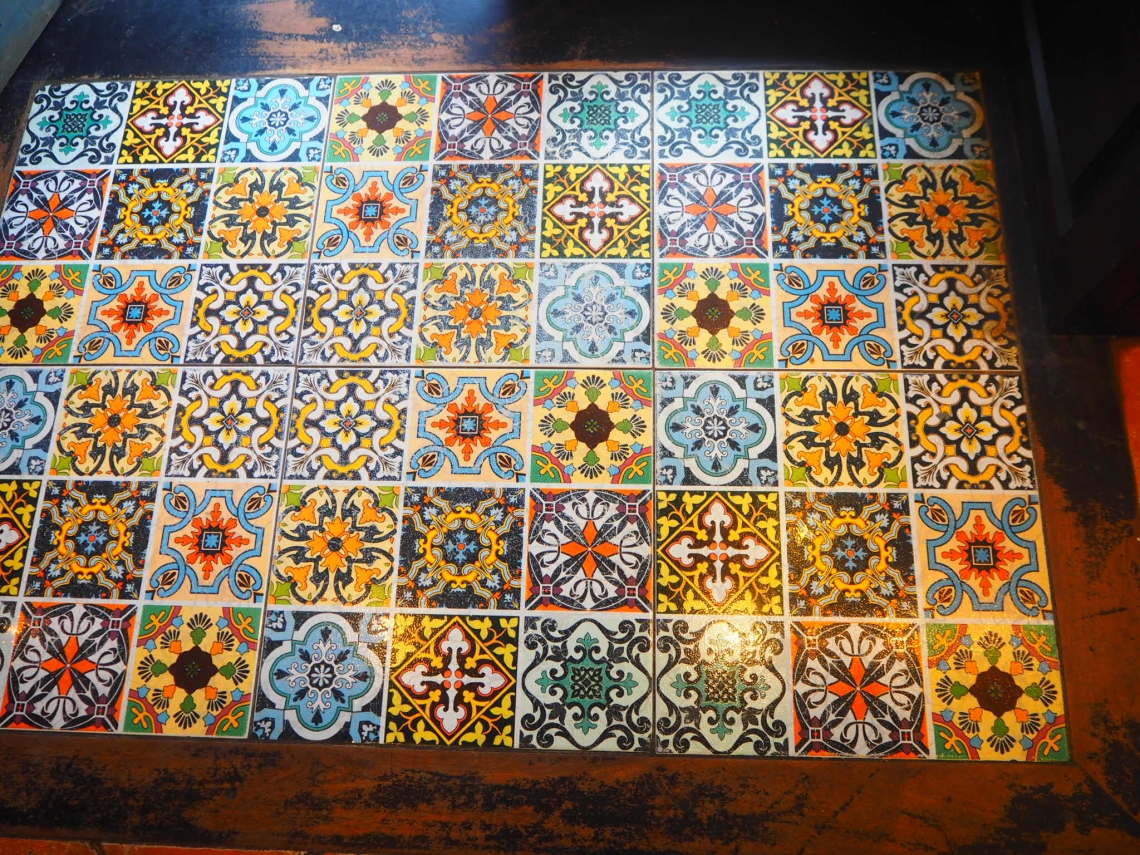 We stopped by here straight after watching the alms giving ceremony. Admittedly there is something not particularly Laotian (apart from the panel of tiles at the front of the cafe, maybe, though even that is probably debatable) about this Swiss bakery offering French bread in a cafe strategically located near the alms walk and opened super early in the morning to target tourists, but the bread and coffee did a great job to wake us up!

We also went to the Night Market on the same road in the evening but I didn’t capture any photos. I bought a few knick knacks from here (fabric pouches) for gifts but nothing further. They are obviously not highest quality local goods but can be a good place to get some gifts for big groups of people.

There are also so many beautiful stores selling homewares, textiles and clothes (of a premium price) on this road, but apart from an indigo and white table runner from Ock Pop Tok (which I would put in the same category of upmarket as Ikat Batik in Ubud) I controlled myself. Luang Prabang is just too lovely to really spend limited time buying things, it’s more of a place to detox yourself from consumption and take long walks.

Belle Rive hotel was having some kind of arrangement with Sofitel hotel where residents of the former could enjoy massages in the Sofitel spa for 50% discount. As it was my birthday my husband treated me to an hour’s aromatherapy massage which the hotel drove us to (it’s about 10 minutes drive and deeper into the town away from the River). Quite honestly I wouldn’t rave about the actual massage. It was a beautiful spa set in a wooden house with stilts and everything about the Sofitel was designed and furnished to contemporary-meets-local perfection but the actual treatment was not the best. I think the best ‘hotel’ massages I’ve ever had and I still remember till today is the Puri Sebali resort in Ubud, Bali (discussed in this post) and the Cameron Highlands Resort in Pahang (Lomi Lomi massage). The ones we experienced in Angsana Lang Co (discussed in this post) can also feature in our Top 5 list. When it comes to ‘off the road’ spas this is when Bangkok wins hands down. I will write about Bangkok more soon.

These are some photos of the Sofitel Hotel – it’s a beautiful property and brand, the only downside was that it was not by the river and we wanted to gaze out into the Mekong. 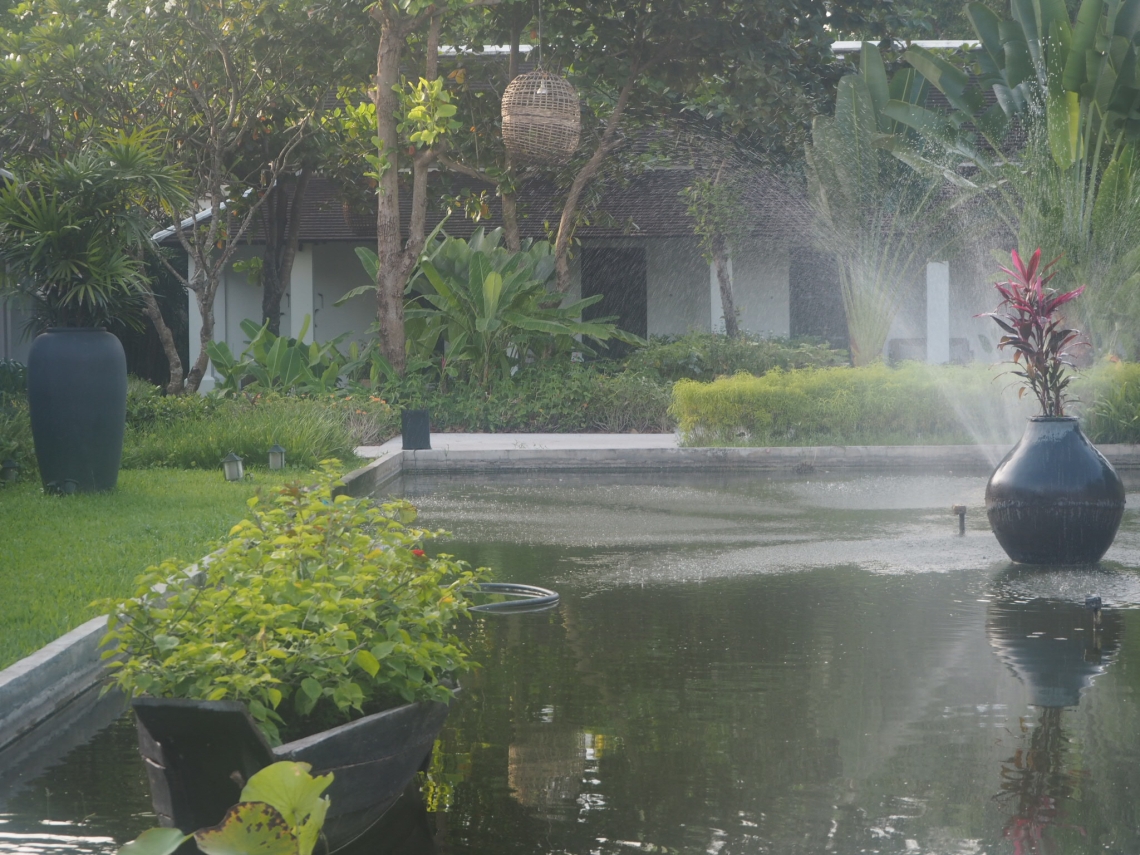 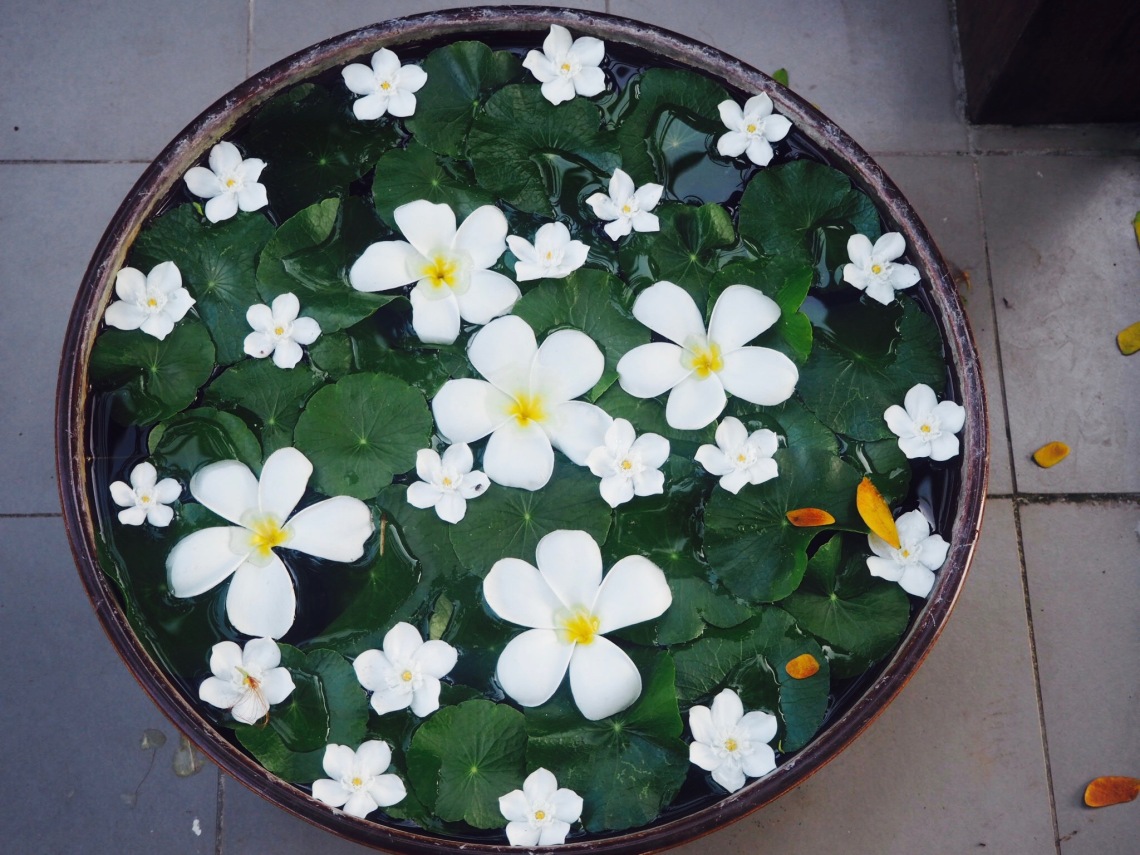 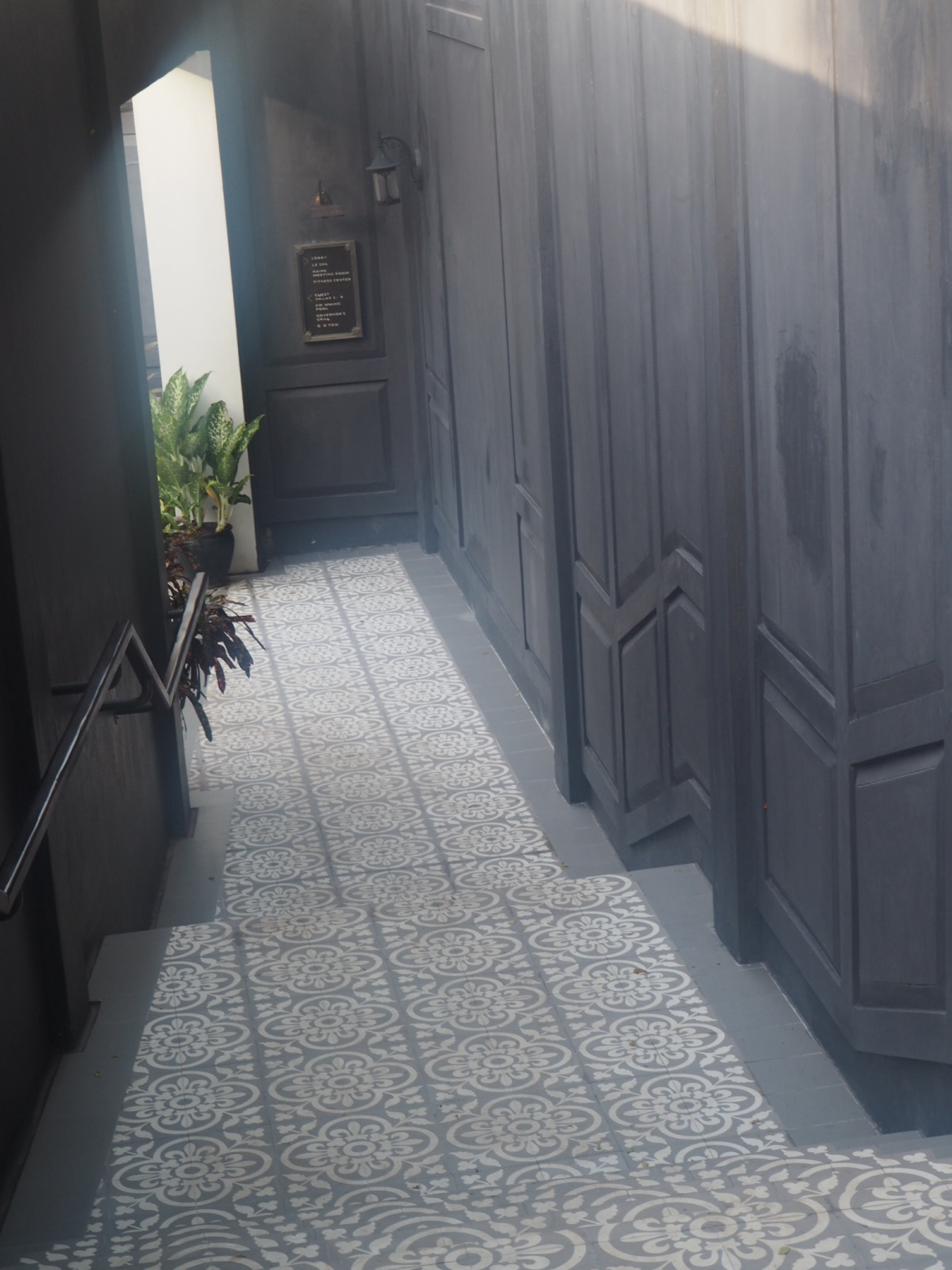 Our only criteria for accommodation was boutique, by the Mekong River and close enough to walk to the old town. We felt the Belle Rive not just satisfied these criteria but went above and beyond. It is literally a three minute walk to Sakhaline Road, it overlooks the River, super chic, intimate and came with amazing complementaries such as unlimited minibar, a sunset river cruise, bicycles and breakfast on the river terrace. Some photos.. 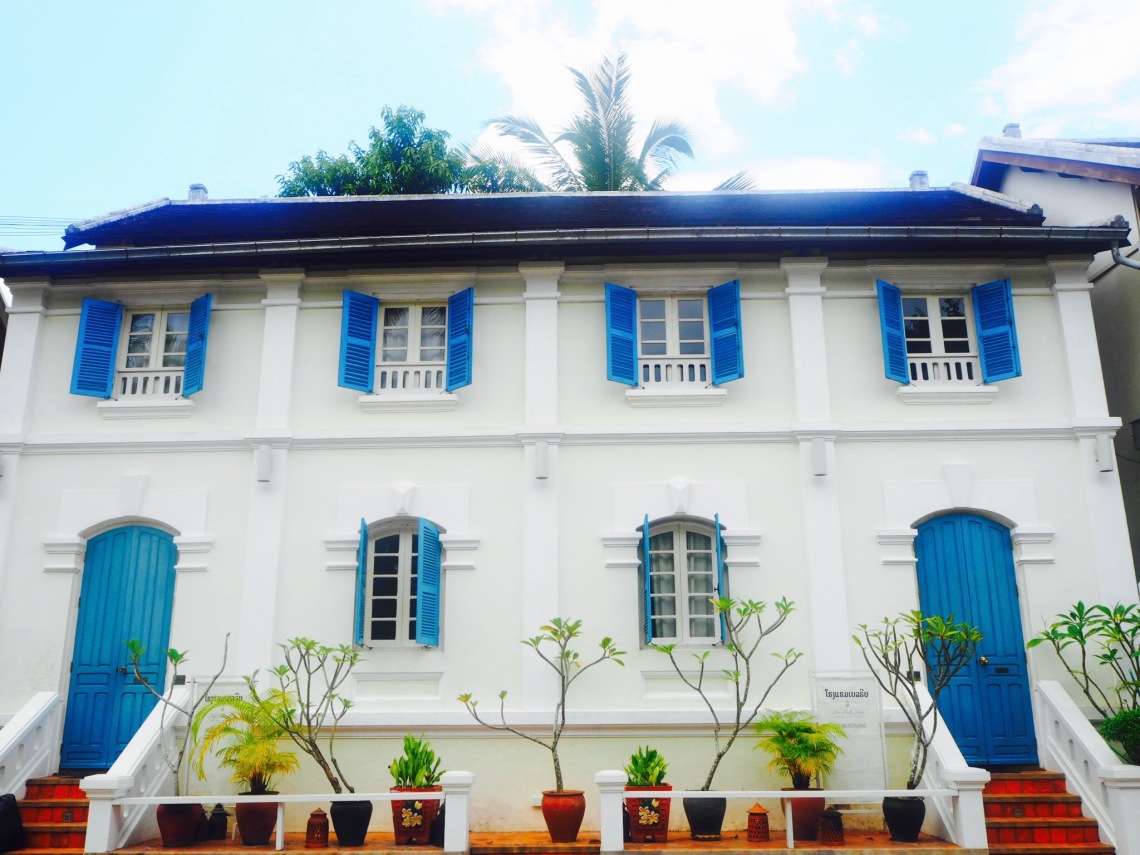 This gorgeous heritage property is protected by UNESCO, was built in the 1920’s and used to be the governor’s residence. We took a Balcony Maisonette unit which is located in the property on its’ right side and also where the lobby is. 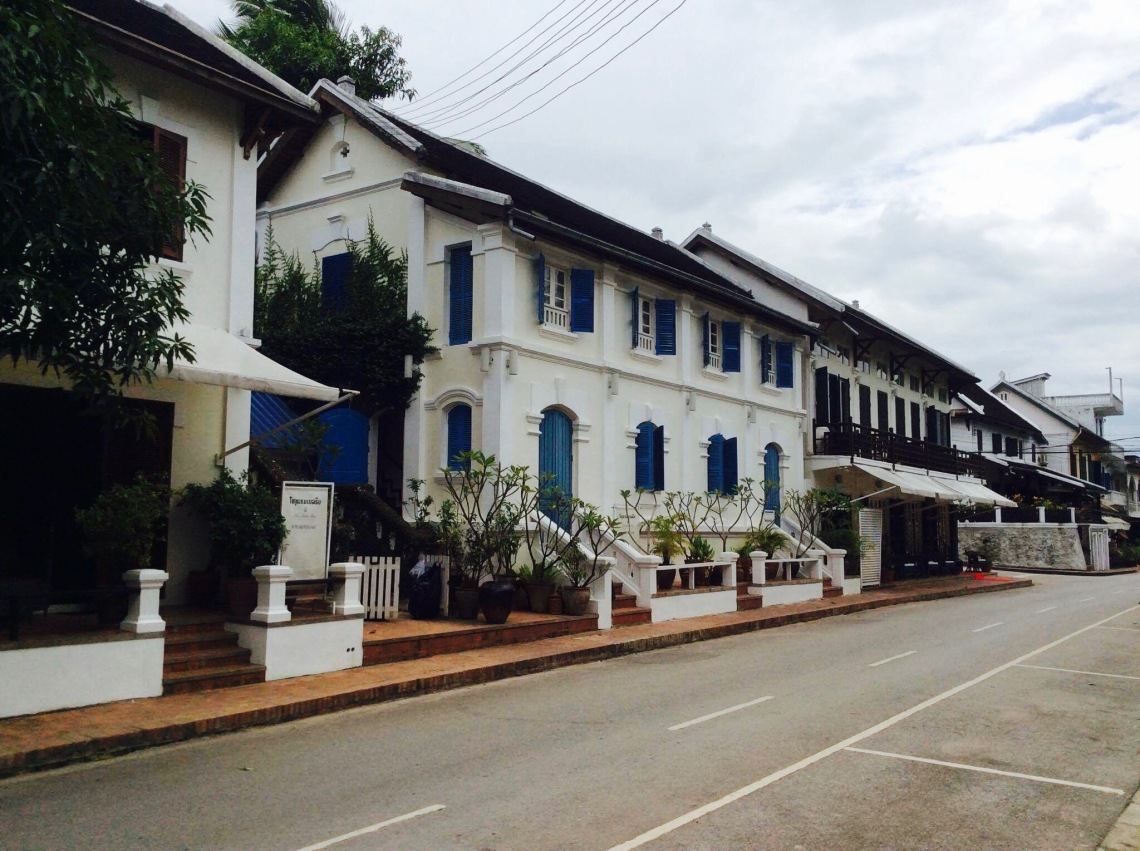 At your disposal. My husband spent one of the afternoons cycling around town.

Breakfast by the Mekong

Local outfit in the hallway

This was definitely one of the highlights of the trip. Although we really enjoyed ourselves, I can’t say it came out very well in photos. Ultimately the best part about the experience is the silence, the feeling of being so close to nature, of being protected in a valley between two mountains. And it’s just a feeling that I couldn’t translate into photos so well. 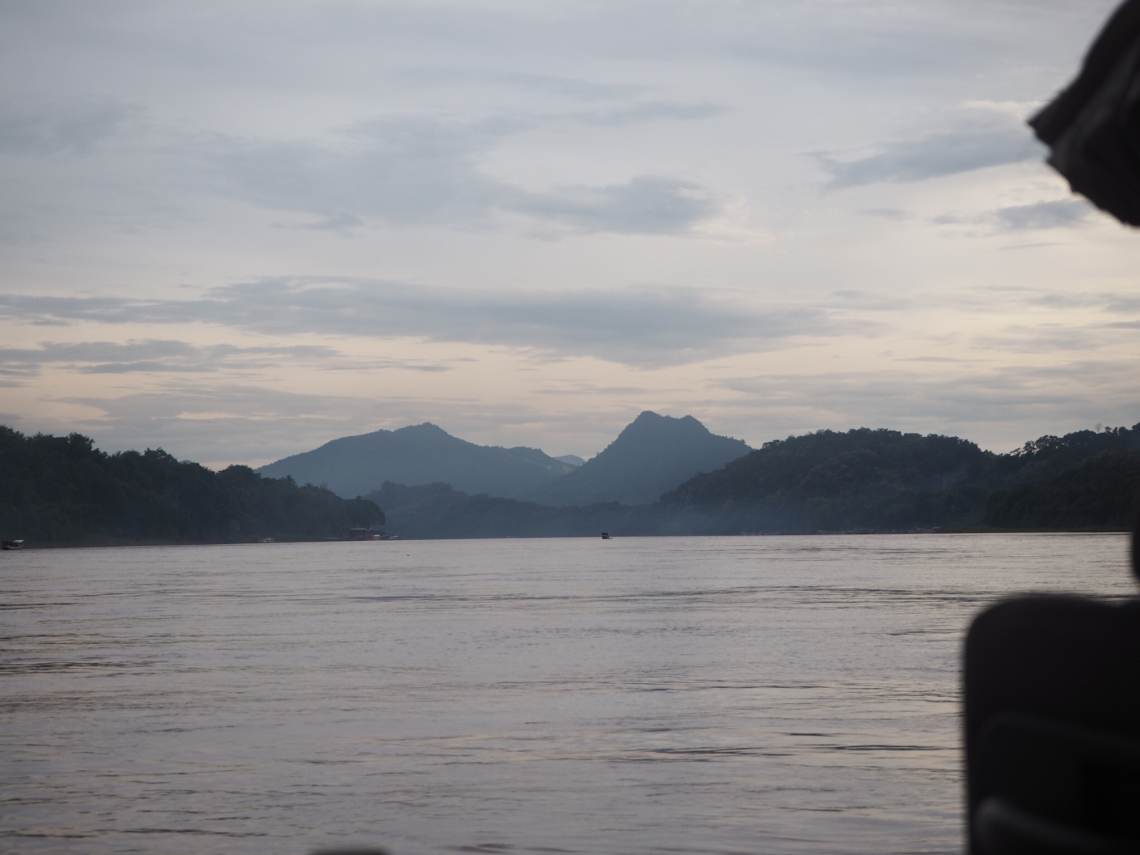 I think Indochina is generally unmissable if you are in the region but if you only had time for one place, and what you are looking for is serenity, natural beauty and a gentle people and culture, then I would definitely choose Laos and a visit to Luang Prabang.  I have never heard anyone regret visiting this place and we felt like we had already seen and felt so much despite our very short stay.