When a work meeting was finally confirmed in Budapest this summer, we set about planning the details of our post-meeting trip to the Balkans and it seemed clear – Dubrovnik and Split were too far by land from Budapest and we would spend large chunks of the holiday getting to or leaving from the Dalmatian coast. The next option were the coastal areas of Istria peppered with initial stops at Zagreb and Ljubljana, which was a more digestible journey. After studying blogs and different travel websites, I chose 3 towns to experience in Istria – Rovinj for the Venetian ambiance, Pula for the Roman amphitheater and cave swimming and Opatija for the grand Hapsburg villas by the sea. By the end of our trip, we were both so pleased we chose the magic of Istria instead of going further south because it was one of the most spectacular weeks we ever had, with so much exposure to the jaw-dropping seduction of the Adriatic sea, incredibly delicious seafood, and the most photogenic old towns we’d ever seen.

First impressions – Beauty beauty beauty. Sorbet coloured walls, pastel windows with wooden shutters, clean cobblestone streets in the Old Town, boats of all types by the harbour, rocks over clear waters. On our first day, we went to Monte Beach to swim, watch the sunset, eat grilled calamari by the sea and stroll around the Old Town and that was basically what life is about here. Some pics of life in Rovinj:

Things we did – Our highlights in this trip was to go for a dolphin safari with dolphinwatching.org (click here for their website) and to sail around the nearby islands with istraordinary.com (click here for their website). A more detailed post on these experiences will come up shortly but ultimately we strongly recommend both these companies for the quality of experience offered. In particular, we were impressed with dolphinwatching.org, for their ethics and respect for the integrity of these beautiful animals and would strongly suggest to anyone planning on a dolphin watching in Rovinj to ignore the dime-a-dozen dolphin tour operators at the harbour but make a booking with this company instead. 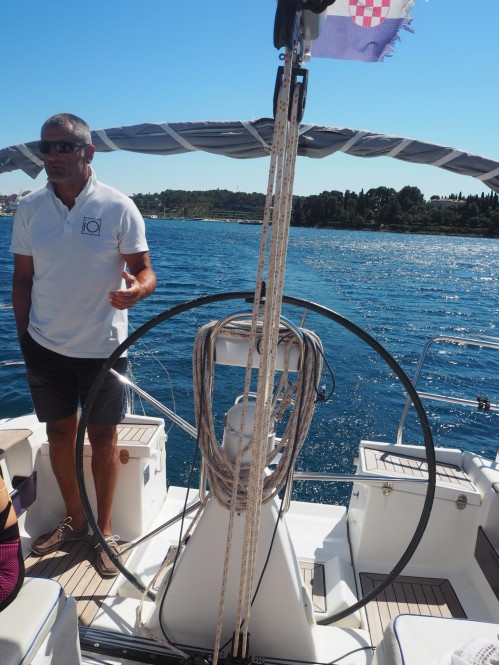 Where we ate – We were recommended by a local to dine at Lavela (click here), where we ordered the seafood platter. When it came initially, we were overwhelmed by the volume and began a serious discussion on how to go about packing the food for home. Of course, we devoured every morsel of the platter in 20 minutes straight.

We also had coffee at Monte Carlo Bar on our last morning which was literally five steps in front of our airbnb. A vlogger has posted a snapshot of this dining spot here.  Perched on the coast, overlooking the brilliant blue and with the sun beating down on us. Go for the scenery and ambiance, really.

Where we stayed – We loved our harbour front airbnb (click here). It’s on the first floor, above the travel agent Planet who was also our super helpful Airbnb host Ranka. A three-minute walk to the harbour and Monte beach and a half minute walk to all manner of restaurants shops and ice cream stalls. Downstairs is an always packed restaurant. Kudos to the soundproof windows too. I was also informed by the Planet travel agent that there were 3 other apartments on the same floor so it could also be an accommodation choice for a big family.

From the window, you can see parts of the waterfront. It’s one of those Airbnb places where the apartment looks actually so much better than the photos. High ceilings, 2 bedrooms, a small kitchenette and bang in the center of it all. And a total bargain at 70USD per night.

First impressions – the Roman Amphitheatre by the Pula harbour and all things Roman and coastal. We weren’t as infatuated with Pula as we were with Rovinj but they are two different towns or rather Pula is a city and Rovinj a town. Pula is the center of the Istrian region and is her financial muscle too. The compromise is less intimacy, less cleanliness (some streets smelled of pee and there was a lot of dog poop) and more industrialisation overall. We were also unfortunate to be there during a time when it was packed with British youths who were mainly drunk and loud. If you plan to take a trip to the region I wouldn’t suggest more than 2 days here, and try to take excursions to the various islands and get accommodation close to the Amphitheatre, which is known to be even more well preserved than the Colosseum in Rome. When we were there, a trip-hop concert was vibrating all night.

What we did – A speedboat tour from the Pula harbour to Seagull Rocks and Cape Kamenjak for cave swimming and yes even abit of cave jumping (not me, my husband). We purchased this excursion through Viator of Tripadvisor (click here) and while the locations we visited were of itself unmissable if, in Pula, we found the delivery less sophisticated than our stints in Rovinj. More on that in a separate post. A small teaser of what we saw. 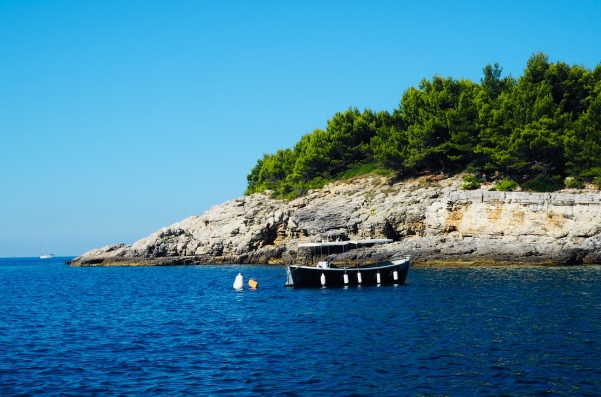 Where we ate – I don’t know whether I was especially hungry but I found the grilled calamari and seafood rice in Bistro Dva Ferala at the Old Town to die for (Tripadvisor reviews here). We dined here twice and was very satisfied indeed.

Where we stayed – This gorgeous Airbnb which had a beautiful view of the Amphitheater and the harbour. It was quite a climb up to the 4th floor (8 flights of stairs) but you forget about that the minute you get inside. We loved the fully equipped kitchen and super spacious bathroom and the loveliest memories were just sitting by the window, devouring a delicious Margarita pizza as we gazed out the spectacular view.

First impressions – a smaller and less extravagant Monte Carlo, miles and miles of an attractive promenade with local art and ice-cream sellers, regal, historical villas from the Austro-Hungary nobility converted to boutique hotels, beautiful cafes with high ceilings and old school glamour. We didn’t stay here very long and I would I say I preferred it to Pula but Rovinj was still my number one. While they are both so beautiful,  the Opatija silhouette and energy is more aloof while Rovinj was just all warmth and passion.

What we did – swam at the beach (what else), did some souvenir shopping (as this was our last Istrian stop so here I stocked up on soaps and magnets), and just strolled down the promenade to soak in the super chic lifestyle on offer.

Where we ate – The Bistro Yacht Club (click here), and boy we didn’t regret it. It’s about local comfort food and it was packed with many natives and only some foreigners, which is always a good reflection on the menu’s authenticity. It was casual, delicious and in line with the nautical vibe of the whole region with charming sailing boats being our main scenery as we tucked into hefty chunks of calamari, monkfish and seabass.

Where we stayed – Amadria Park Hotel Milenij. It was the only accommodation extravagance in this trip. I don’t know why, there was just something about the hotel photos that drew me in more than any of the other beautiful hotels on the waterfront. The incredible breakfast hall, stylish Cafe Wagner, the deluxe rooms with a sea view, the pink walls of the property… it oozed nostalgic luxury. It was just as the photos suggested but we did notice service defects. We paid for a deluxe room with sea view in the old wing, which was of a higher rate and we were told mineral water was not complimentary. While the check-in staff was good, their colleagues in the breakfast hall were less friendly and amiable.

We honestly cannot recommend Istria enough. It has so much culture, history, architecture, colour, beauty, nature and sea activities to make it a holiday to remember. Not forgetting the diversity from one part of Istria to another. We would love to return if ever there was an opportunity to explore more of Istria and eventually get to the Dalmatian coast too. For now, we cling on to these memories like a parcel of joy.